I was walking down the street and saw this sign, which has some clear mistakes. 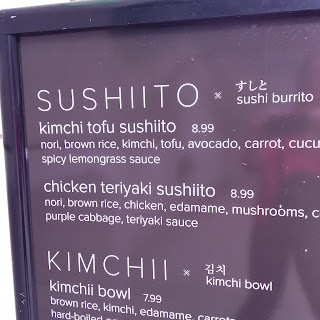 They transliterated すしと as "sushiito." The double-i means it's a long sound, but すしと doesn't have that: す=su し=shi と=to. If they were truly transliterating it, the Japanese would be すしいと: す=su し=shi い=i と=to. It seems like they're trying to be clever because they've created a sushi burrito, so they've combined the two words, but they failed in the execution.

Also, I'm concerned about the spelling of "kimchi." According to my favorite Japanese language site, Popjisyo (which now has other Asian languages), when I pasted the Korean word 김치 in, it translated it as "kimchi." Even an official kimchi museum in Korea spells it that way. But the sign has that spelling, plus "kimchii." Why couldn't they at least settle on one? (Thought I suspect the double-i would be wrong anyway.)

I'm surprised that a restaurant in a major part of the city (downtown Chicago) made such mistakes. They could've gotten some native speakers or knowledgeable non-natives to proofread the sign. Way to go! How's your food?
Posted by Margaret Larkin at 4:32 PM