Dave Berner (I should actually say "David W. Berner") has written several books, is a professor at Columbia College, a news anchor on WBBM Newsradio, and is currently the Writer in Residence at the Ernest Hemingway Foundation. 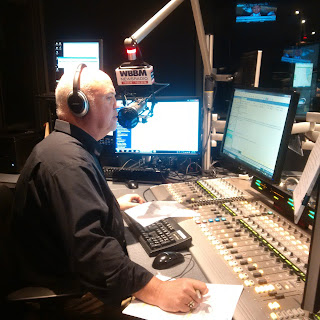 I met him at my good writing gig (he gets off the air when I arrive to work, but I’ve written intros to his recorded news stories during my shift) and read his book Night Radio because I like radio and wanted to see what kind of fiction writer he is. In spite of me telling him my honest opinion about the book, which wasn’t totally effusive (though Part 2 makes it especially worthwhile), he still agreed to be interviewed (I'm joking; he had no problem being interviewed, whether I was crazy about the book or not). He seems to be a very friendly guy, and I feel like I should really get my act together now that I’ve found out more about his productive, creative life.

How long did it take you to write Night Radio?

From concept to publication? Probably eight years. I wasn't sure about the idea or the approach, so I batted around a number of forms and narrative structures, writing then stopping, then starting again. But once I was sold on a rough story arc, I started writing with the full manuscript in mind. From that point on, it took about a year. I'm a regular writer, meaning I try to write everyday. So, the first draft was done in about 8 months. Then more edits and changes and fixes.

How do you establish a story arc, and what is considered an effective arc?

Frankly, I don't think about this too hard. Not in the traditional sense, at least. But what I do pay attention to in either nonfiction or fiction is to be sure something is happening to those in the story. Focus on what is motivating the characters, and if it is memoir or creative nonfiction, that "character" is me or the narrator. It can be subtle, and many times that is best. Or it can be dramatic. Still, there must be some sort of action—physical, emotional, and/or spiritual—some movement in the story.

What makes a good story?

What touches us. I'm not of the belief that there must be conflict or action or a crossroads. I think these are good in a story and many times they are essential, but to me it's about the heart. What moves us.

For this book, what was your method? Did you have an outline?

This was my first book of fiction. I wasn't sure at first how to approach it. Generally I do not work with an outline, at least not a formal one. I might have notes and bullet points about major turns or drama in a story, but I tend to just write and see where the story leads me. Joan Didion said that she writes to find out what she's thinking. I like that. Plus, I really believe the story is already there inside me somewhere—I just have to write to get it out.

Is there anything that's based on your real-life radio experience?

It is impossible to write any fiction without parts of your life seeping in. People who are fiction writers who tell you otherwise are fibbing. But let me make this clear: Night Radio is fiction. It is not a memoir. It is not a nonfiction narrative of life in radio. Still, there are characters, scenes, and narrative turns that definitely are linked to real events. Are they word for word, piece by piece? No. But there are elements of things that did occur. I'll let the reader figure out what they think is based on some truth.

What do you want people to gain from reading Night Radio?

I have found that nearly everything I write has the theme of redemption intertwined in it. Someone has to come to grips with something or find peace. Maybe not discover some ultimate "answer," but some level of acceptance. I think I want that from Night Radio's readers, too—to see that all of us are flawed. But it's how we develop after those discoveries. I think the protagonist in Night Radio is not very likeable at first, but then begins a journey that changes him forever. That can happen for all of us.

How has the response been so far?

I've been fortunate to have had good reviews both from readers and critics. It's, to some extent, an unconventional story narrative. But as one critic said, "it works." I hope so. I'll permit the reader to decide. It may be MY story when I'm writing it, but it is THEIR story when they are reading it.

When do you write every day? What's your favorite time and place?

I'm a coffee shop writer. I don't like total silence or what I call the tree house approach, to hide away somewhere. I like energy and people and the clinking of coffee cups and even the whir of an espresso machine. Most of all I like conversation around me. Don't get me wrong, I don't want to be writing in the middle of chaos, but I do want life around me. Time for writing? Anytime. But I do like mornings, when I have that opportunity. But I have written at every hour. If I had to pick a time I do not do well writing, or don't like, it would be after dinner. I prefer mornings— even early, early mornings, just as the sun is rising—or afternoons. Two to three hours. Rarely more. Take a break, come back to it, but never 4 to 5 hours straight. And always quit for the day knowing where you are going with the story. That way you’ll come back with a place to start.

How are you able to write books in addition to teaching at Columbia and doing radio news?

I really do think it has something to do with my broadcast background. We write fast in radio; we write on very hard deadlines. Plus, as I mentioned before, I work hard at trying to make writing a priority. I think of it as working out—got to go to the gym and get the work done. I carve out time here and there—an hour here, two there, fifteen minutes on a train. Writing for me is at the top of my list of things to do; I always make time.

What's the difference between writing fiction and nonfiction?

I had a friend in a writing workshop one time ask me what I wrote. At the time it was all creative nonfiction, memoir. "Creative nonfiction," I said. "Oh," he said, "you write the hard stuff." He was a fiction writer. He truly believed writing what was real was tougher than making it up. For me, that seemed ridiculous. I come from a journalist background, and to make it up seemed very odd. But now that I have written fiction, along with memoir, I see what he meant. All my fiction has come from someplace real, but I can change and tweak the story to fit a narrative. Creative nonfiction or memoir is real, or at least the essence of truth, and that sometimes can be raw. I really like the raw stuff, the good and real emotions below the surface, but I have to say, I also like "making it up" more than I thought I initially would. The difference is permitting yourself to be free of restraints. You can be utterly free in fiction and only marginally free in memoir.

Do you write by hand?

Laptop. But I do take notes in a journal that I refer to sometimes. It's a Moleskine.

I have always been a creator. Wrote songs, some bad poetry, but when I started writing more regularly, it became my go-to outlet. It's life-affirming. It gives me peace and energy at the same time. I am compelled to do it.

What other books have you written?

I have four books and a fifth coming out in 2017. Accidental Lessons was my first, a story of my time teaching in a public school system at a very tumultuous time in my personal life. Any Road Will Take You There is also a memoir, probably my most intimate book. It was named the 2012 Book of the Year by the Chicago Writers Association for non-traditional nonfiction. I was quite humbled. And There's a Hamster in the Dashboard, which is a collection of essays about living with pets. I was pleased to have the Chicago Book Review name it one of the Best Books of 2015. Night Radio is my first novel. And October Song, due out in April of 2017, is about holding on to dreams when we age, a road trip story about music and the passage of time.

Do you wish you could go back and rewrite any of them?

I'm laughing thinking about your question regarding rewriting a book. Here's all I have to say about that: I believe it was Leonardo da Vinci who said or wrote, "Art is never finish, only abandoned."

What have you learned over the years in writing your books?

If you are writing memoir, don't hold back. Be willing to open your heart and be brutally honest because the reader will sense, will know, when you are not giving it all up. And in fiction, never answer the question fully when you are asked, "Did any of this really happen?" But above all, I've learned, at least for me, don't write to a genre or a particular market; write what matters to you. Please yourself first. Your readers will come. Writing is zen-like, spiritual, personal. When you turn art into a business or exclusively into an act of commerce, it loses something very special.

In 2014 you were Writer-in-Residence at The Kerouac House in Orlando, and now you are Writer in Residence at the Hemingway Birthplace home through next summer. How did you get those?

In both cases, I had to apply for the positions. They are vetted through writing samples and history of publication, and your vision of what you want to do with your time there.
Posted by Margaret Larkin at 4:16 PM No comments: