A while ago, I was on the Metra train going to and from University Park, and I passed by the Pullman stop. It looked historical and interesting, not like the West Pullman shootings we often hear about in the news. Ever since then, I was curious about the area, and I finally got a chance to go there recently. What I discovered was a quaint neighborhood of restored row houses (retaining the requisite Pullman colors)... 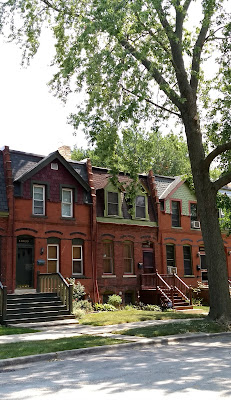 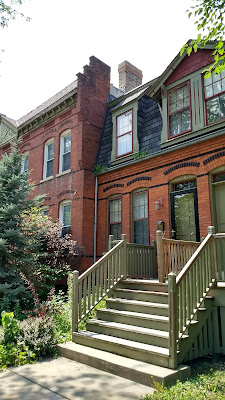 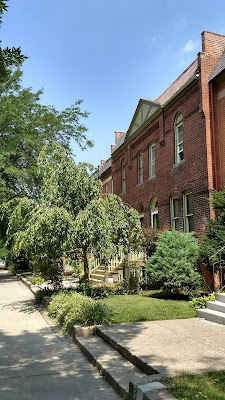 and friendly people who said "hello." I don't think I've been anywhere in the city where people voluntarily greet strangers, and it shows how much pride they have in their neighborhood. It's more a location than a major tourist attraction, though I plan on going on the factory tour before they close it down for restoration (they're going to move the visitors center to the factory's tower, which is also being restored). I have a hunch that when they make major changes, there will be a lot more visitors. The day I went, there were only a few of us, and we were from the city. So I think I've seen the area pre-rush because it's become part of the national park system, and I reckon they're going to do a lot of publicity to get more people down there. I was lucky to see it "unspoiled" and pretty much empty, which allowed me to enjoy it a lot more (instead of having to compete with crowds to get a glimpse of the historic houses and surrounding nature).

There's an art installation at the Market Hall, whose remains are sort of sad but hopeful. 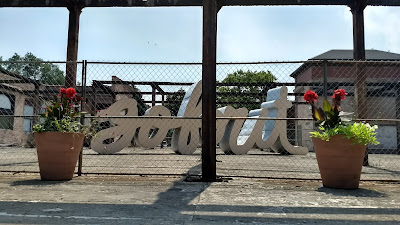 There are also grander homes thrown in, such as this place, similar (or the same?) to where I think the former police chief lives... 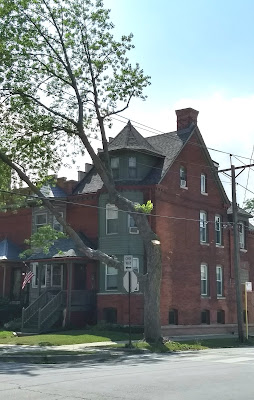 and this house, which is one of the larger ones in the hood. 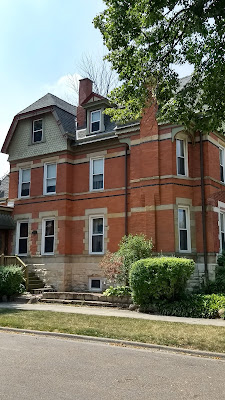 Towards the center of the area is the worn (but undergoing restoration) Hotel Florence, where the Rich and Important stayed way back in the day. 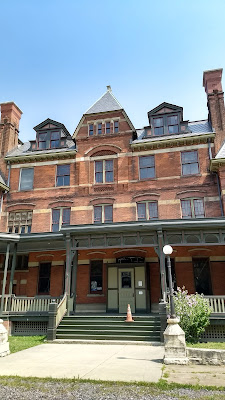 But nothing is happening at the Annex (where workers and some visitors stayed); it sits unused northeast of the hotel. 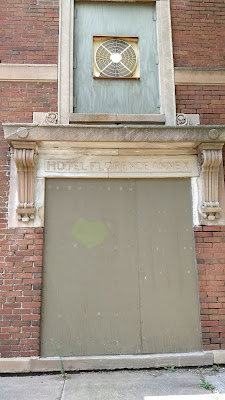 There is so much to appreciate there. It's not fireworks and spectacle, but it's really incredible to see such a historical area be preserved and celebrated. It's easy to get there, too: just west of the expressway or on the Metra Electric line. Hopefully the upcoming hype won't affect its charm.
Posted by Margaret Larkin at 7:43 PM No comments:

I want to use "can not" instead of "cannot"

I was proofreading something (because, according to my elevator speech that I should have, "I solve language problems"), and saw that the writer used "can not" instead of "cannot." I wanted to see what language pros say about it, because it seems to me that "can not" is acceptable, which Oxford and Grammar Girl (who's made a total success out of language nerdiness) say as well.

Writer's Relief goes so far as to say "cannot" should be used, and I find a comment by Gideon Roos interesting: "It follows the grammar tendency set up with do not and should not etc."

Commenter James Gentry mentions a post by Languagehat (whose quote I kept in my blog's "masthead" even though he removed me from his blogroll) about it, in which he says, "The only context in which can not, two words, occurs is as an emphatic alternative: 'You can do it, or you can not do it'.”

I seem to remember "back in the day" (whenever that was, and if it really should be considered that, which is worth another blog post) that the conventional construction was "can not." I think "cannot" slipped into acceptance to the point where it's a given.

So I'll go with the AP, since that's closest to my language world's order. And again, I'm proofing and editing and writing stuff all the time, so I should know better. And don't worry--I ended up correcting that "can not" to be "cannot," so all is well.
Posted by Margaret Larkin at 1:51 PM No comments: