I guess this is a real last name

Brent Payne (a very interesting guy I interviewed for my podcast) saw this name: it must be real because I think this is a workspace.
Posted by Margaret Larkin at 1:21 AM No comments:

It's already September and I realized I've been here 6 years

Wow, time flies. I started this blog in August, 2004 and now it's September, 2010. Six years. That's a long time for a blog that does not have super exposure and doesn't make me money or bring me fame :D Not that I'm looking for it. But I've had thousands of visitors from well over 100 countries, and I'm glad people have found it online and have told others about it. I still love language and will continue to study and translate it. So much has happened since I started this blog--when I started it, I was working a lot at home and felt the need to express myself and my love for language. Since then I've worked in so many situations and have experienced so much, most recently good. Thanks for reading and feel free to tell your friends :D
Posted by Margaret Larkin at 8:39 PM 2 comments:

A lot of podcasts that are considered entertaining tend to have lots of swearing, vulgarities, and other things that aren't allowed on broadcast radio since there are no FCC rules for podcasts. But here's a good one that is entertaining and clean: Snyde Remarks Radio.

I met one of the hosts (they're married) Wendy Snyder at a Chicago radio station, and she is very cool. I also interviewed her for my podcast because she's been on the air for several years and is quite well-known locally. Her husband hosts a popular Star Wars podcast and has been working in radio for years, so they're both professional broadcasters, which means their podcast doesn't sound amateur like some others I've heard.

If you're learning English, it's also a good way to practice your listening skills for natural speech.
Posted by Margaret Larkin at 11:48 PM No comments:

Land of the Lonely

I read a good article that expressed what I've been thinking for a while: we live in an isolating society where people have lots of "friends" but they're not really deep: "in restricting ourselves to the thin gruel of modern friendships, we miss out on the more nourishing fare that deeper ones have to offer." True, but not a lot of people realize that, and I don't think they ever will.

Whenever I see people's large list of friends on Facebook or wherever, I wonder how many of those people they really connect with. Sometimes I want to point out the charade and tell everyone they're playing a game, but then I wonder if there's something "wrong" with me because I don't want to play the same game. Sure, I know a lot of people, but I want to connect in a real way with them as well. However, they would think that is weird, so I just stay within the definitions we've all set, and it actually bothers me that some folks are so superficial and want to keep everyone in a box.

Especially in the US, there are so many people traveling on their own path and they don't like to cross with others unless it suits them in some way. The article says that


Developing meaningful friendships—having the kind of people in your life who were once known as "intimates"—takes time, but too many of us are locked in what social critic Barbara Ehrenreich has called "the cult of conspicuous busyness," from which we seem to derive status and a certain perverse comfort even as it alienates us from one another.


People seemed pleased with themselves when they tell me "I am so busy", and I've said the same thing and even caught myself feeling proud of my packed schedule, but realize I'm just getting caught up in such a status symbol. I like being busy but not to the point that I don't have time for people. But when I do have time for them, it's like watching people go by on one of those people movers that you see in some airports or in The Jetsons. They want to communicate, but only within strict limits, within defined times.

I think that interesting people are rare, so when I meet them, I really want to get to know them better. Maybe they're baffled by the pursuit of "friendship" but act like the non-interesting masses to fit in, but I can't easily find out what they're thinking because they're not willing to let their guards down to discuss this modern trend.

I don't know if it's just an American thing, but it's something I've noticed ever since I moved back here years ago. I hear from non-American residents that Americans seem fake because they smile and seem friendly, but they don't want to go deeper. However, with people's reliance on technology to connect with other humans, the trend can become worldwide.

I just don't want to be accused of being insincere, but I also don't want to be going against the grain. I'm just glad I know at least a few real people I can talk with who know what true communication is.
Posted by Margaret Larkin at 11:28 PM No comments:

A lot of people use "lol" or "ha ha" online (and Thais use "555" because 5 is "ha" in Thai), but I learned recently from one of my ESL students that the Spanish online laugh is "ja ja ja" because "j" is pronounced as "h" in Spanish.

So if you're ever chatting with someone or see a post online from a Spanish speaker and they use "ja ja ja" to show laughter, now you know why :D
Posted by Margaret Larkin at 4:53 PM No comments:

I don't want to promote ads since I don't get any money or products from those businesses for writing this blog, but this commercial is so good. I like the style of it and the pace, and there's something about it that seems real. How many times have you seen something and imagined you with it? We all imagine "What if" and this captures that. It's simple but effective. I really like the woman's look and voice too.

Unfortunately, this is the only video I could find, and it's not as good quality as it should be, but at least you can get the idea of what the ad is like.

Posted by Margaret Larkin at 11:29 PM No comments:

Email ThisBlogThis!Share to TwitterShare to FacebookShare to Pinterest
Labels: tv

For some reason, when I was doing all that Japanese translating, I kept listening to this song. It's so good, even more than 20 years later.

Posted by Margaret Larkin at 6:33 PM No comments:

Email ThisBlogThis!Share to TwitterShare to FacebookShare to Pinterest
Labels: Music

I was going to do a post today, but I'm in the middle of a massive Japanese translation project, and I will hopefully still be alive tomorrow--the kanjis are overwhelming me :D
Posted by Margaret Larkin at 8:37 PM No comments:

Here's a good title and concept for a country song that I made up: "My Heart is Leaking Without You". So if you end up hearing that anywhere, remember it was me ("I" to be grammatically correct) who created it :D
Posted by Margaret Larkin at 11:10 PM No comments:

How is fruit vegetarian or vegan? 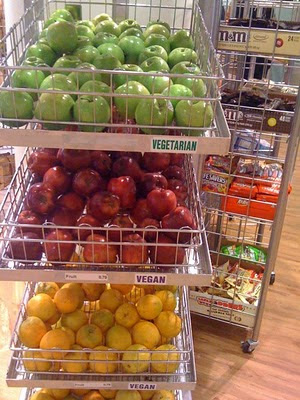 Still can't figure it out.
Posted by Margaret Larkin at 10:17 PM No comments:

Sometimes the comments on Facebook are a good read, such as the one below, posted by Chris Duffy (who's been on my podcast). This is his response to an article that featured the ugliest cities in the US:


Total BS, and more predictable crap from some full-of-herself priss sitting in either NY or LA, capering merrily she's not from one of these cities, and clueless to the fact that their inhabitants share that joy as well.

Ironically, topping the 'Best Looking' cities? Miami. Which is a total tropical sh**hole that makes you reach for the brochure ... See Moreon Tijuana time-shares.. Miami is endless cheap strip malls, graffitti, expressways designed by cracked-out Italians and sprawl....with maybe 1 to 3 miles tops of modestly attractive neighborhoods. And for every sun bunny, there's 30 decrepit losers that the city collects from all over the world. The joke there? Someone tilted the United States on its' side. Whatever wasn't bolted down rolled into South Florida.

Besides, one word; Lebron. Rich. Famous. And the last person on Earth you want to see trotting around in a banana hammock. All glam, but when the Speedos are off? Eeeew. Welcome to Miami. Sing it Will.

Once a year, some useless soul puts together what amounts to a a 'Detroit/Cleveland/Pittsburgh' bashing list, whether its' looks or traffic or life span or health....always making fun, guffawing at some fault or another of that cromagnon wasteland they call 'flyover country'. Fact is, those cities you chuckle at are the reason you don't speak Nazi, lady. They built the machinery that turned the good ol' US of A from a one horse episode of the Waltons to the savior of the freedom loving PLANET. Now, as you drop what for them is 6 house payments on one spa treatment, they don't ask for much. Maybe a compliment on their delightful rap music. And unique mustards. Perhaps a second glance at the cars they build. (...yknow, the ones that DONT accelerate on their own and kill your whole family) Those.

By the way Madonna and Taylor Lautner are both from Michigan. And even Queen Bitch himself, Elton John, thinks Eminem is hot. (Or was, anyway, pre-Slim and more Shady). So stuff your list where the botox don't tighten, totalbeauty.com. There's no palm trees and the sushi sucks. But I'll take ten minutes of steeltowns over a lifetime of plastic anyday.


I like good writing, wherever it is.
Posted by Margaret Larkin at 11:24 PM No comments: