I am tired of seeing "however" with a comma

How many times do I read an article or blog post or email or whatever, and I see the word "however" punctuated incorrectly? Enough to finally do a post about it, after years of tolerating the mistake! And yes, I just created a fragment on purpose...it was a deliberate style decision.

But back to the important topic at hand: many people, educated and not, do not understand the role of "however" in a sentence. I know people who are sticklers about language, and they use "however" in such a way because they're quickly texting and want to loosen the rules. That's acceptable, and I've probably done that myself. I'm not talking about those people who know the rules enough to break them; I'm talking about people who don't even know the rule, and think it's acceptable to not use a semicolon or to start a new sentence. In fact, that previous sentence is an example of what I'm talking about: I was joining two independent clauses, thus needed a semicolon, not a comma, which is what a lot of people use even when "however" isn't in the picture.

So back to "however"...here's an example of how people usually treat it:

I want to go to the store, however I have to work.

That is a comma splice! The comma is separating two independent clauses. It should be:

I want to go to the store; however, I have to work.

I want to go to the store. However, I have to work.

Someone just told me that they hate it when people start sentences with "however." However, that's correct, unless it's a fragment. And that sentence I just typed is correct. This is not correct:

Someone just told me that they don't like sentences that start with "however," however it's fine to do that even though it's not stylistically preferable.

So when is it okay to use "however" with a comma? When it's a side comment...example: (I just created another fragment for emphasis, on purpose, in case you wanted to point it out.)

She wanted to organize a trip for 50 people. What she was planning, however, was not feasible.


She wanted to organize a trip for 50 people, but what she was planning was not feasible.

I can understand why students may not know these rules, but professional writers or people who call themselves "experts" and are writing articles or newsletters to promote themselves really should know better. If they don't know, they should have someone check what they're submitting to stem the flow of bad punctuation.
Posted by Margaret Larkin at 5:05 PM No comments:

Email ThisBlogThis!Share to TwitterShare to FacebookShare to Pinterest
Labels: punctuation

I always assume large, multinational corporations have a lot of money, but apparently McDonald's doesn't seem to be able to afford a proofreader for something as simple as a temporary sign. I was walking by the torn-down Rock 'N' Roll McDonald's and saw this sign: do you see the mistake? 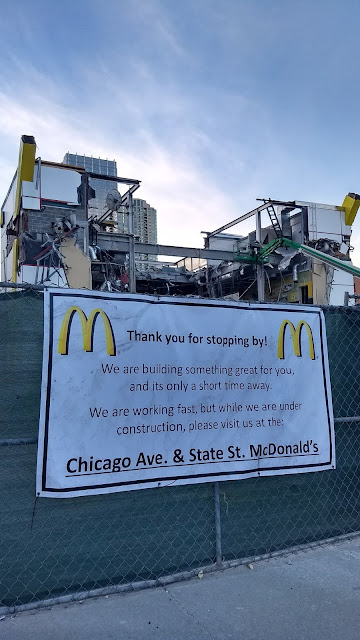 Answer: "its only a short time away," which should be "it's [as in "it is"] only a short time away." It's incredible that people from a company where the CEO has a compensation package of over $15 million can't afford to peel off less than $100 to hire someone to proofread their signage. Yes, I make mistakes at work, and even here (about which comments have been made), but I'm usually writing well over three sentences, which is all this sign has. It probably would've taken 15 minutes to check this sign before it went to the printer, yet they didn't bother to do such work.

So I guess McD's still needs some help, even though their profits went up. I wonder if I'm the only one who noticed this.
Posted by Margaret Larkin at 2:40 PM No comments: