Why I got a Blackberry

It's too bad I'm not a rich, powerful, or famous person because my endorsement of Blackberry would probably affect a lot of people, and the company would be happy. I'm just an average joe, living life and trying to find ways to effectively communicate with others.

It took me a while to get a smartphone (which will probably not be called "smart" or maybe not even a "phone" in the future because such devices will be commonplace and won't need such a descriptor; but that's another post). The only reason why I moved from a simple cell to a smarter version is because I literally missed out on freelance work; people emailed me, and since I wasn't at a computer, I didn't read the emails for a while, thus missing opportunities.

I got a Blackberry Bold, and I was just glad to have something that combined my multiple email addresses (I currently have six on my phone, and have an additional three at a few workplaces). I wasn't happy with the slow Internet and was even more upset about the lack of multilingual capabilities. So I switched to an iPhone 4s, which had lots of great features.

This is not a slam against Apple because I've been using their computers since the early 80s, even when they fell out of favor. When people started noticing how great Apple computers were and bought various iProducts, I was proud of the fact that I'd been a loyal customer for so many years, not just a fair-weather friend. Of course, I liked the iPhone because it was a further example of the elegant technology that was characteristic of Apple.

But there were some things I missed about the Blackberry. The biggest feature was the keyboard. I could write long pieces of texts, and even typed out all my notes from a class on it. But I figured that ship had sailed, and we either had to choose an iPhone or Android.

One day, I'd had enough of the iPhone. It happened when they did an OS update, which made my phone almost inoperable. Until then, I'd managed to use it for videos (with an excellent Apogee MiC that I could plug in to it), photos, Google Voice (which has been discontinued for Blackberry), email, and other things. Even though the system seemed solid and the design was pleasant, it seemed that they didn't care about older phones; with every OS update, they made the phone less enjoyable, almost seeming to punish us for not upgrading to a 6. I didn't want a 6; my phone was enough for me, and the Apogee MiC's plug fit my phone, and I didn't want to get an adapter for the newer versions. I also liked the thickness and smaller size of the 4S; the 6 was bigger and thinner, which I didn't want (even though lots of people want such sizes, and it was Apple's response to the popularity of Samsung's bigger phones).

There was also the annoyance of the forced U2 album, which auto-played at random times, even when I was using the phone to make an actual phone call (I would hear some music starting, wondering if there was some kind of on-hold music somewhere, but it was a U2 song that I hadn't requested or downloaded or even knew existed). I eventually followed the directions to remove it from the iCloud (which continues to send messages that I have to log in, even though I didn't, and still don't, care about using it). That imposition was part of the larger iPhone issue: they're really into their identity to the point that I end up finding out about executives' personal lives and personalities, as if they're aspiring to dish out their own version of celebrity gossip; the company seems to be about its image and people, as well as the product. I don't care about the people; does the product work? It does? Good. I'll buy it.

I was way overdue for an upgrade, so out of curiosity, I checked to see if Blackberry was still around. I found the Blackberry Classic with very good reviews. They were so convincing, I went to a Verizon store to check it out. That was a mistake. I told the salesperson that I was interested in the Classic, and she did *not* want to accept my request. She tried to convince me to get an Android. I kept telling her I wanted the Classic, and she asked me why, not accepting my reasons. So I left the store and called Verizon for the upgrade. When I said that I wanted an upgrade, the person probably assumed it was in the iPhone family, because when I said "Blackberry Classic," there was a long pause. Silence. Disbelief. But he processed my request. (Dear Verizon: it's okay to want a Blackberry.)

The Classic is fantastic, but if you're into lots of apps, stick with Android or iPhone. People say there are plenty of apps, and you can find some in the Amazon App store. But in other places, when I see apps advertised, they give only iPhone or Android options. Also, some apps don't behave like they should, even though they can be loaded.

But I don't care about apps anyway, except for Filmic Pro, which was my go-to friend when I created iPhone videos. They don't have an app for the Blackberry (of course), so I have to use my husband's iPhone instead. And Google products are pretty useless on Blackberry as well (though I have a Chromebook and an Android OS on an SD card in my aging Nook, which is another topic for another post). 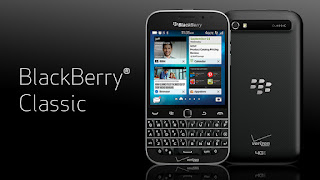 Bottom line: I don't regret returning to Blackberry! This is why:
1 - Excellent typing. I've resumed taking lots of notes and communicate with people a lot more because typing is so easy. Before I'd wait a while to respond (if it wasn't work-related) because I knew I'd have typos. And of course, I'd never write anything that was lengthy. Now it doesn't matter!
2 - It's now international! I easily loaded the Japanese alphabet on my phone, and can switch back and forth with no problem.
3 - Anything can be done on the touchscreen, but there are options, like the menu button. I can also select text by touching the screen, but I can also use the trackpad. Options!
4 - I like how the text looks when I'm reading an eBook (Amazon works very well on it), article, etc. I feel like it's solid and sleek.
5 - I can put files where I want! When I had an iPhone, I couldn't download files where I wanted; it forced files into "boxes" or apps that I didn't choose or create. But the Classic allows me to use it like a computer, with file folders and a directory that I can control. So if I download an mp3, it's a pure file; I can put it where I want. Same goes for a PDF, photo, or anything else. And mp3's just play when I hit them; I don't have to open iTunes or whatever to process them. I like the flexibility!
6 - They've improved the Internet speed and photo quality, so I don't feel like I'm missing out on better tech.

When people see my Blackberry, I get perplexed looks, with comments like, "They still make Blackberrys?" Or "The company is still around? I thought they went bankrupt." Or "God bless you for having a Blackberry." I'm a throwback, and apparently, I'm part of the one-percent, which seems to be the market share that Blackberry has. But I don't care. This is not a popularity contest, and I'm getting what I need out of my phone. Like I said earlier, I can't affect many people because I'm not rich, powerful, or famous, but at least I'm one person helping to stem the tide of the company's failure.
Posted by Margaret Larkin at 2:27 PM 4 comments: