I am still trying to maintain my Japanese, even though I have no opportunities to speak it or even hear people speaking it, unless I go to Mitsuwa, which is far from my house. Before the pandemic, I went there once or twice a month, but I've only been there once since the pandemic began. When I go there, I shamelessly eavesdrop, even if I have to linger around a food fridge for a while, because live-speaking native Japanese speakers are rare in my area (I'd probably have better luck in California). A couple of years ago, I wanted to buy a croquette ("korokke" コロッケ) and asked the guy who was in the food booth a question. He said he didn't understand English, and started to get someone else to help, but I told him I could understand it. We said a few words, and it was wonderful! Another time I tried to speak Japanese, and it was a bust. I was visiting a radio show and was speaking with a Japanese guy in English. His friend didn't understand English, so I spoke some Japanese. The English speaker kept interpreting what I was saying, which made me feel like my Japanese was awful. I think it was because I didn't remember all the words I wanted to use, and my accent and probably syntax weren't great. I kept thinking that if I were speaking Spanish (which I can read but can't speak) at the level I know Japanese, they would probably get what I was trying to say.
I've been following Japanese accounts on Twitter, and I often have to look up words. Because Japanese can maximize the character count there, the tweets are longer than English ones. Sometimes I start reading them and want to give up because they seem so complex, even within that small space. And the kanji is brutal. There are thousands of kanjis to memorize, and just when I think I have a handle on them, many more pop up.
That's why I really like NHK's News Web Easy. First of all, the news stories are simplified, so I am able to comprehend the meaning via the sentence structure. And if I don't know the kanji readings, I can click 漢字の読み方をつける and the page will show all the kanji readings, and then I can click 漢字の読み方を消けす to turn them off. I can also listen to audio of the story as I read it. The only downside is that there aren't many stories to choose from, but it's better than nothing! 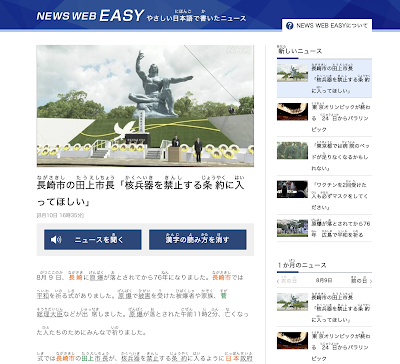 There is always the option of finding an article and pasting it into Google Translate, then playing the audio button. I don't know what happened to my favorite translating/deciphering website, Popjisyo. Is it gone? Before Google Translate became more robust, it was the go-to site for understanding Japanese and eventually other Asian languages (though I only used the Japanese part). I loved that site! But I noticed that Rikai is still around. Maybe I should try that.
Update: I just went to Popjisyo and it's back! Please don't go away, Popjisyo!
p.s. Order and get info about my novel Wicker Park Wishes at the Eckhartz Press site, www.wickerparkwishes.com
Posted by Margaret Larkin at 2:10 PM No comments:

If I were paid well per hour, I would have made a lot more money than I have over the past couple of years, because I have racked up so many hours at my main part-time job and have stayed employed at my other gigs, that it would add up to a lot of dough. I have been working at different jobs simultaneously, and autumn looks like it's going to be super-busy as well, but I'm not getting rich. And that's okay, but I really wouldn't mind making a lot of money. I never have, and never cared if I did, but I've seen what it can do. Not only does it allow you to do more and decrease worry about being able to pay for things, but it really helps the economy and helps people live better lives.

This was clear when the pandemic hit last year. I live in an area with stores and restaurants, and they had to be closed, so people couldn't work. I ended up doing what I usually didn't do before: ordering out at least a few times a week to give the restaurants business. I saw the effect that few or no customers had on places, and even though I wasn't paid well, I was over-employed and didn't lose any work, so I used the money I made to spend elsewhere. I also sublet an office space when I could have easily worked at home, and I kept getting a monthly massage and eventually returned to the gym, and kept going to a trainer. I was really lucky that I could do all those things, and my employment still hasn't decreased. Now I'm thinking what else I could do if I had more money to spend.

There is a lot of consumerism, even conspicuous consumption, going on in my area. I don't know if the people who are buying luxury items or going to restaurants are thinking about the positive effect they're having on the economy, but they really are helping. Now I realize that if I were wealthy, I would gladly spend money at businesses and get various services. I wouldn't be irresponsible, because I've always lived within my means, but I'd do more. For instance, if I had tens of thousands of dollars to spare (and of course I don't make that much), I would get rid of my car and hire a driver every time I had to go somewhere. Many drivers could not work during the lockdown, and now they're catching up. I would gladly leave the driving to someone else, and it would give someone else money to pay their bills and improve their life.

It's important to save for a rainy day; I've experienced underemployment and was laid off at one point, and couldn't find work and felt horrible. There have been times when my checking account didn't have much in it, so I could basically pay my bills and not do much else. Not having money is a real drag, and there are, of course, many people who are struggling throughout the world. Before the pandemic, I would look at busy places and think that I didn't have to spend anything there because people already were giving them business. But during the pandemic, there weren't many people around to patronize the businesses, so I realized my spending helps; it helps the people working there and helps those throughout the supply chain. Spending has become a way to help society, so now I'm seeing having money as more than just a buffer; when circulated, it goes in other people's pockets so that they can give their families more than just the basics.

I managed to travel a bit, spending a couple of days in Milwaukee and in Central Illinois. I was really glad to spend money on the hotels, restaurants, theater swag, and a museum membership. I wish I could do more, but I plan on doing what I can as I keep working and earning enough so that I have disposable income that can be shared in productive and enjoyable ways.

Posted by Margaret Larkin at 12:47 AM No comments: