Some work-related highlights of 2014

Now that the year is coming to a close, I want to write about some memorable, positive work experiences that I had this year. I don't usually write about work, though sometimes I'd love to vent about some things, but that's obviously a huge mistake to make online. During the holiday season for the past few years, I've worked many days at WGN Radio filling in for the Creative Director, Commercial Director, and even some producers. This year I haven't had the opportunity to do that because I was required to leave there in order to take a writer's gig at another radio station (which will be a separate post because it's the best writing gig I've ever had). Even though my positive work experiences really span more than just this year, I want to talk about it now because this year was the end of that chapter in my [weird] work life.

First of all, radio is a shrinking, failing business for many reasons that a lot of other people have delved into in various places online, so I won't get into it here. But the combination of the insecure business plus insecure people means working with others, especially on-air folks, can be challenging (some aspects of which I wrote about in The Help and The Hierarchy of Personality). Earlier this year my time with Bill Moller wrapped up. I had been working on his show as a producer for almost two years. He has been working in media (mostly TV) for several years, and is also a highly-paid consultant. Basically, he's a very successful guy, but the way he treated me was memorable because he didn't care that I wasn't successful (well, that I wasn't successful in the same way--I guess in terms of life satisfaction, I'm successful). Successful people *should* treat others well, but unfortunately I've noticed that someone as decent as Bill is rare for a few reasons that probably include money, position, and the inability to relate to, or care about, those who aren't on the same level. Bill always let me be myself, which meant a lot to me since I don't have a milquetoast personality, and he let me express my thoughts and opinions, even if he didn't agree. He also consistently showed appreciation for what I was doing, even though, honestly, my job wasn't difficult. It's his decency that made my job easy because he was never demanding or rude, and he never "pulled rank" to let me know he was the Talent, and I was not. I really felt like I was a part of a team, which, again, is rare in radio. I was treated so well and respectfully, it became a standard when I worked with others to the point that I really didn't want to work on other shows anymore.

Another excellent experience was filling in for the Commercial Director. What made it so fantastic was that I was doing very enjoyable work, plus I was interacting with wonderful people *every single* time. It is very hard to find such a combination. When my boss took time off and I would fill in, he totally trusted me and just let me do my job. I absolutely looked forward to filling in for him, and it is probably the best work experience I've ever had. I won't name the people here because they might be embarrassed, but I had to deal with sales people, production people, voiceover people, traffic/continuity people, management, and sometimes on-air people, and I always had fun, fulfilling interactions with them. There were times when the deadlines were tight, but it always worked out, and I really felt like the whole thing gelled in every way. Another rare experience.

Filling in for the Creative Director was a different experience, but what made it special was the guy I filled in for had a ton of experience and was super-picky, but he also trusted me to do the work. He even complimented me, which he doesn't do readily, so it meant a lot. Overall, doing creative audio for a radio station engages the mind like few other tasks do, and I was privileged to get that opportunity.

Of course, teaching this year was good, and I will continue to do it because there is no strife or office politics, which is another rare situation. It's also a place where we can be open and outgoing and have fun. (I mentioned that workplace in my Introverted World post.)

I've tried to thank individual people outside this blog post, but if I've forgotten anyone, I'd like to say THANK YOU and have a great 2015!
Posted by Margaret Larkin at 6:04 PM 2 comments:

Even though I live near the Museum of Contemporary Art and like David Bowie's music, I wasn't very interested in going to the exhibition until I got an email offering a slight discount (because I'd already bought a ticket for someone else). It was worth the price! I wasn't expecting much because when I'd seen other exhibitions of famous people, there weren't many artifacts, and the presentations didn't seem so innovative. A good example of an underwhelming and disappointing exhibition was about Pelé, which I saw in Brazil. Even though I don't care much about soccer, I thought there would be more information and items to look at that covered his life and career. What I remember most was how it seemed to be a commercial for Coke. Maybe I'm not remembering accurately, but the Coke logo and red color seemed to dominate the exhibition. So I thought the "David Bowie Is" show would be a bunch of hollow hype. But it was way more!

The most impressive aspect of the exhibit was how they creatively used multimedia to show his performances, influences, and recollections. There were also numerous documents, including handwritten lyrics, historical artifacts, and sketches. Plus, there were several outfits displayed that he'd used throughout his career, along with explanations of the designers and inspirations (such as Kansai Yamamoto using concepts from 19th century Japanese theater). When I bought the tickets, the guy said that it would take 1.5 hours to get through the whole show. But I spent about 4 hours there, and would have stayed longer if the museum didn't have to close. It's best to go through it twice to fully get the impact of all the visuals and to listen to the audio that enhances some of the installations. If you're into his music, you'll hear many songs in your headphones as you pass by TVs and through rooms, and in the final room, you can see various performances from over the years. This is a room worth settling in to for a while because it also has his outfits that are illuminated between the sets. I even watched all of his film clips. Seriously, it's a vibrant show that effectively showcases his creativity over years.

Time is running out--the exhibition is only until January 4, and Chicago is the only venue in the United States! If you don't live in Chicago, it's worth the trip, because you'll also get to see the city all lit up for the holidays. I didn't intend on even blogging about the show, but it was so impressive, I really think Bowie fans should see it. (I took all the pictures below: prepping the poster, opening night, and how the poster looked on the museum's wall.) 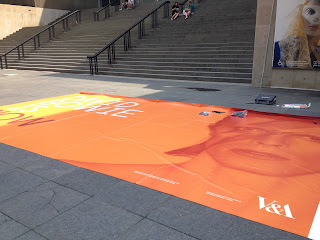 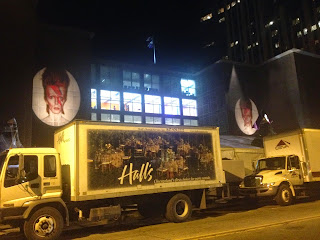 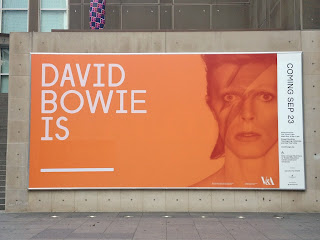 Posted by Margaret Larkin at 4:08 PM No comments:

A great explanation of creative struggles

It's been a while since I've posted anything on this blog, and I thought I was going to post more often since I resumed working more with language (as a news writer and ESL teacher). But I've been taking a digital video class this semester that has filled my brain, ie, I haven't really expressed myself creatively in other areas. Even though my video projects are short, they've taken several hours, in addition to the other homework, class time, and socializing with other students. It's been fantastic, and is one of, or possibly the best, class I've ever taken!

Since I'm not working in radio much and haven't been doing any audio production for radio lately (which I used to do more often at the previous companies I worked), I've felt down and frustrated at times. But then I would notice that my mood would lift when I worked on my video projects. For instance, I've been working on creating a rough cut of my final project, and even though it's just a few minutes long, I've spent thousands of minutes refining the visual and audio aspects of it, and have felt great every time! Even when I do a blog post here, I feel really good, like I'm in The Zone. But my lack of writing here made me inexplicably muddled and I kept feeling guilty due to procrastination and avoidance.

It turns out that the weird feelings I've been having are actually "normal" for a creative person. I don't go around thinking I'm creative, and really don't admit to it if someone brings it up, but after reading this post by an artist, it all makes sense.

The artist, Cedar Lee, writes that artists struggle psychologically and have other negative feelings, then offers her theories about why they get depressed if they don't work: art is empowering, art gives identity, art makes you high. The post is worth the read--you might identify with what she's saying, even if you do other creative things. Actually, I've heard that performers crash when they step off a stage or away from a microphone. There are probably other good articles out there about creative depression, so I'll keep looking.
Posted by Margaret Larkin at 6:48 PM No comments: