I was talking to a friend yesterday, who told me how wonderful the film Paul Williams is Still Alive was. He had gone to the Chicago premiere at the Gene Siskel Film Center on Saturday, where Paul Williams gave a post-movie talk. I told him that I don't usually see films because many don't seem worth the money, but he insisted that this film was great and showed what an interesting and strong person Paul Williams is. Then he proceeded to tell me a lot about the film, and I assumed that what he shared was just part of it. Unfortunately, there wasn't much else to discover once I got to the theater.

The guy who made the film is a professional, but he's either a bad interviewer, or Paul Williams doesn't have much to say. There wasn't much revealed about Williams, though there was a lot of footage that sparked nostalgia and some chuckles. Basically, what we learn is what you can find in a Google search: Paul Williams was an addict and has been sober for 20 years. What the filmmaker, Stephen Kessler, made clear was that Williams is happier now than when he was incredibly successful and famous, but seriously, there's not that much else to the movie. There isn't even anything inspirational that will help others in their quest for meaning and significance from a guy who had it all but is happier now. Kessler didn't try to delve into the process of Williams' transformation from someone who was desperate for attention, money, and fame, destroyed it through addiction, and now is satisfied. It's just a shallow portrayal of an interesting man.

I also fault Kessler for not asking good questions and not bothering to find out what Williams did in all those years between being a big celebrity to being a slight one. He mentions that he was a counselor for addicts, but what else? Also, I didn't find out about Williams' motivations or thoughts about his life and about fame. At one point, Kessler asked him why he bothered to get married when he partied so much. Williams started to answer, but then said he didn't want to talk about it. If Kessler was a good interviewer, he'd ask a question a different way, or try to get some answer out of him. Another example of his weak interviewing skills is when he asked a question like (not the exact wording): "How did you go from being a writer to being on the Gong Show?". Williams said he didn't like the tone of the question, and wouldn't answer it. Again, a good interviewer would rephrase the question because what I want to know, and probably a lot of people want to know, is why he was all over the place, in all kinds of TV shows, movies, etc. Why wasn't he more discerning about choosing projects?

At one point, Williams says that his dad died in a drunken car crash when he was 13, and he ended up living with an aunt. Then later on, Kessler shows some footage of Williams in a TV interview, where he talks about the same thing, sans the aunt part. Why would he include TV footage that's redundant of what Williams revealed in the film? With all the footage and access to Williams that he had, he didn't seem to care about delving deeper into such a loss and change of lifestyle when he was so young. How did he feel about his mom and brother who lived with her? How does he feel about the entertainment business today? How did he get his big break? How does he feel about his success, in spite of the fact that he didn't look like the Hollywood prototype? There are many other questions I had when I walked out of the theater, dissatisfied with the superficial approach that Kessler took. One of the things that we learn when we get older is to be reflective and share what we've learned. Kessler's treatment of Williams doesn't show that, or maybe Williams is shallow. Who knows because I couldn't figure out if it was Kessler's production that made Williams appear that way, or if he's a weak "documentarian" (I put that in quotes because it didn't seem like a documentary, at least compared to what we get from other documentaries).

When the film started, I thought it was going to be an interesting ride that started with Kessler's interest and eventual pursuit of Williams that would then go deeper into his life and thoughts. But the film is a sketch of a man that we can assemble from a variety of sources on our own. I don't feel like I know Paul Williams better, and his story seems to be just about a guy. But he's more than just an average schmo; he's a man who achieved more than most people would ever dream, and he learned a lot along the way. We don't get that or any meaningful insight; what we get is a bunch of images and a few words that end up with an unsatisfying movie experience. So I guess this is another movie I shouldn't have spent my money on.
Posted by Margaret Larkin at 10:33 PM 1 comment:

A typo on Canada Day

Today is Canada Day, and while I'm not Canadian, I like that place and have been there more than a few times. Actually, I'd like to go again, but my passport has to be renewed :D

I was looking at different Canada Day articles, and discovered a typo that the Canadian radio station, Newstalk 1010 (CFRB), committed: using "it's" instead of "its". "It's" is a contraction of "it is", and "its" is the possessive form. Oh well, maybe those Canadians will eventually learn proper English :p 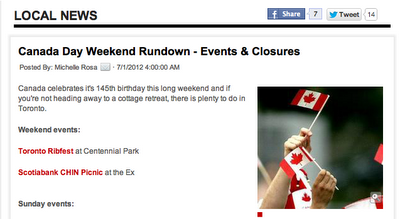 Posted by Margaret Larkin at 9:02 AM 2 comments: