Having a great time with Suivez la Piste!

Because I'm spending way more time at home (interspersed with times of working alone in an office or with very few people elsewhere), I've had a lot more time to study languages, and it's really helped me not feel frustrated or hopeless during this virus time. When I wake up, I might initially wonder what's the point of the day other than just getting work done, but then I think about all the language possibilities awaiting me, and then I feel great.

Well thanks to this extra time (which may not happen again once a vaccine is created or the virus is eliminated), I ended up getting a copy of the very rare, but previously common, Suivez La Piste, which I used many years ago in a school French class. I don't remember exactly when I took that class, but I remember the teacher seeming to not enjoy teaching all that much, and I think he was annoyed with the apathetic/immature students. Little did I know back then that I would want to study languages on my own, and that I would want to use this book again. 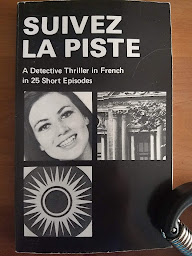 The book is a French detective thriller that was created as a radio program on the BBC in the 60s and was published in the early 70s in the US, and it is now very hard to find. I thought it would be available online, but the person who posted the text on a blog had deleted it, and all that remained was the audio. I ended up purchasing the book on Amazon through the IHM Sisters, who raise money to support their community and elderly care in Michigan. The book was labeled "used" but is in excellent shape, just like new, and they packaged it thoroughly so that it arrived in perfect condition. I think I bought the last copy they had, but if you want other books by them, go to their Amazon storefront.

I'm so used to looking up words in a dictionary or online, at first that's what I did when I didn't understand a word in the book. Then I saw that they had all the words in the back (of course...it's a school textbook), so I don't have to go far to find out what something means. The book also has grammar exercises and explanations for each chapter, and has more extensive dialog than what is in the audio; the book has a line down the side of the dialog that corresponds to the audio, and the extra dialog and description are on the page without a line. 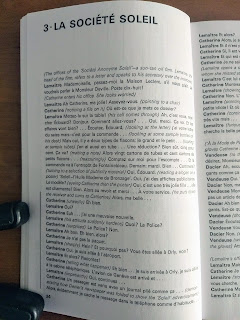 Page inside Suivez la Piste: the line next to the dialog is included in the audio; dialog with no line is only in the book.

Surprisingly, I think I understand a lot of it, though if I just listen to the story it's hard to catch everything. A person who[m] I contacted online to find out if they had the book (before I ordered it from the Sisters) kindly and unexpectedly gave me some extra exercises and words to look at before I listen to the audio. I couldn't believe they did that--I'd never met them before, but they were very helpful and positive about my pursuit!

Many years ago I'd taken the book for granted because I had to use it in school. Now I see how it's an excellent resource to learn French and be entertained along the way, with references to technology and items that no longer exist, or are barely a part of contemporary culture. It's like a retro radio play, and the acting/voicing is really good as well.

So what seemed like a weird, sort of creepy time (because I don't want to/can't go wherever I want or see or talk with whomever I want [which is very difficult for extroverts/fake introverts like me]) has become a time of opportunity to rediscover language resources from yore and discover new outlets as well.
Posted by Margaret Larkin at 1:18 PM No comments:

Social distancing has caused me to study languages more

When I started this blog, it was very language-oriented, but as the years passed, I did posts about other topics and got involved in non-language pursuits elsewhere, so I didn't post much about language, if at all. Sadly, some important people removed me from their lists and I sort of went off in various non-language directions, though I've been copy editing and proofreading for years.

Now that I've decided to socially distance through 2021 (though I didn't really have a robust social life anyway), I've really gotten back into language. I'm following German, French, and Japanese sources on Twitter, and really should be following Spanish and Portuguese as well, because Twitter is a great way to learn. If I don't know a word (which is often), I look it up. I think Japanese is my most-studied language because there are a lot of really cool accounts that I follow, and some of my retweets are retweeted and liked by Japanese sources, which is really cool. Trying to understand the kanji is very challenging, and is sort of stressful, but I keep trying and it's very fun. There are times when I'll take a work break to read Japanese tweets, then I'll go down a rabbit hole looking up a word, how it's used, etc. Even while writing this post, I took a break to look at some Japanese posts and wow, it is so interesting!

I've even been reading a 1980s French textbook called "En Route" that I got when I was cleaning out a family member's room (I think...I don't remember how I acquired it, but it was in our previous house). I don't know if the textbook still exists, but it's good, even though I'm sure the readings are outdated.

I recently used the book to study the difference between passé composé and l'imparfait because I'm trying to understand Bruno Crémer's memoir, which seems to be written in tenses I don't always recognize. Trying to get through that book is like trudging through wind and snow...i.e., very hard :(

Amazingly, in my French-learning pursuit, a very generous person who I've never met but emailed about another obsolete French schoolbook sent me some helpful study materials (I'm being vague because they really did me a huge favor even though I didn't ask for the stuff...they were just very kind and helpful). I can't wait until I do the first lesson. Thus I've discovered a bright spot during this social distancing/lockdown situation!
Posted by Margaret Larkin at 12:54 PM No comments: