My favorite TV show is Japanese

A long time ago, when I was still listed on Languagehat's blog list, someone complained that this blog wasn't totally language-oriented, especially because I would write about TV. What I should have said is that I was still working at home doing language-oriented work such as editing, writing, proofreading, and translating, and I would watch TV as a diversion or put it on in the background. I spent many days working at home, and the silence would sometimes cause more loneliness, so the TV and radio and Internet media were on to create some kind of companionship (when people say they want to work at home, I don't think they understand how isolating it can feel...I did it for years and still do it every week).

Now that I spend more time working outside my home (which I'm very happy about...I never want to work at home all the time ever again), I still watch TV, but I watch at the end of the day or very early in the morning. I have become a fan of NHK World, which has some boring shows, but has some interesting ones as well. What helps is that they don't dub all their shows, so if I want to listen to Japanese (since I rarely see Japanese people in Chicago), I can watch the Japanese video and read the subtitles if I don't understand (which is often). NHK is really a promotional outlet for Japan, and their positive images make me want to go there again. It's probably the best place to travel in Asia, and I would like to travel the entire country by train.

Recently, I have become hooked on an excellent show called Document 72 Hours. The NHK crew goes to a single location and films people over a 72-hour period, and people tell their revealing stories. It is so interesting and a slice of real life...it's truly reality TV. When I'm watching, I don't want it to end because so much more could be discovered, but they only have 25 minutes to work with. I'm surprised there's nothing like it in the US. Having such a show even just in Chicago would be fascinating and entertaining, and there are so many places to go, the crew would get a lot of content. Even just doing an audio series would be interesting...I wonder if anyone has done it. I'm just thinking out loud here, but maybe someone would want to pursue it...I can help out :D 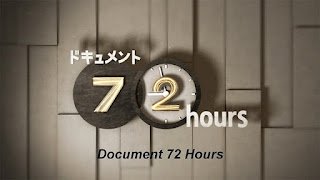 Posted by Margaret Larkin at 7:38 AM