I saw this sign this summer when I stumbled upon a Japanese festival at Mitsuwa, a large Japanese store in Arlington Heights. It's humorous and cute--they probably translated "mashou" (～ましょう) literally, because when you put that ending on a Japanese verb, it means "let's". So the Japanese is 踊りましょう (odorimashou), which literally translated is "let's dance". Then for some reason, they made "dance" a gerund, so it ended up as "dancing", and voila! You have some Japlish in Chicago! 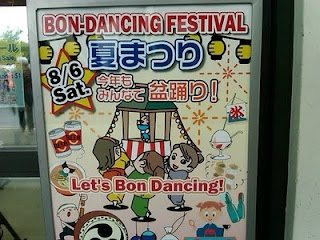 Posted by Margaret Larkin at 11:28 PM