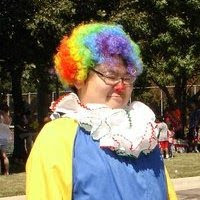 This is such a funny picture, I just had to post it here. This guy is one of the most interesting people I've met, and he's only a teenager. He's really smart and can talk to different kinds of people, and has no problem being friendly with adults. He also has a more international/unique perspective because he came from China, and speaks English and Mandarin fluently, in addition to a dialect that he says doesn't have tones (though I wonder if it does, based on the description of his hometown Chongqing).

Update: after reading this post, he read about his dialect and realized that it *does* have tones. Which makes me wonder why he thought that. I guess that's part of being a fluent native speaker of a language: you just speak it and don't analyze it, especially if you're just a teen :D
Posted by Margaret Larkin at 9:34 PM

Hmmm...according to that Wikipedia entry, all of the languages/dialects spoken there are tonal. Maybe his family originated in another area. Maybe he speaks Tibetan? Interesting.

They're not from Tibet, definitely Han Chinese, but maybe he perceives them as not having tones.