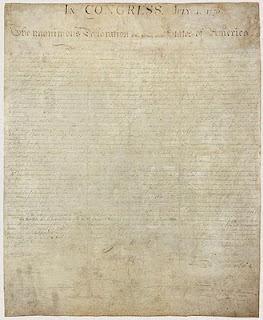 Now that the Canadians had their Canada Day, it's time for our day: Independence Day! It's not when the US became a nation, but when the colonies declared independence from England through the Declaration of Independence. From there, there was a war that the colonies eventually won, of course. Otherwise, I'd be using British words and British spelling, and wouldn't be fascinated by the differences of our English :D

You can read it online. I actually made it a part of this week's test in my ESL class, though I think they were baffled by the 18th century English.
Posted by Margaret Larkin at 12:48 AM

Email ThisBlogThis!Share to TwitterShare to FacebookShare to Pinterest
Labels: Holidays