I "won" Nanowrimo yet again, for the sixth time!

Even though I said last year that I will never do Nanowrimo again, and I also said it the year before that, I did it yet again this year! If there were no pandemic, I wouldn't have done it, because I would have spent a lot of time commuting, working, and perhaps socializing (though my social life wasn't great anyway before the virus), but since we've had to stay at home so much and social distance, I had more time on my hands. So I figured I'd do it again. And I'm not as wiped out as previous years.

This year, for the first time, I joined writing sessions ("sprints") on Twitter, and they were really helpful. If I had more time, I would have edited what I was writing along the way, but since the daily word count had to be about 1700 words to reach the 50,000 by the end of November, it would have turned the couple of hours that I had free into several more.

In the past I had an idea and just wrote a bunch of pages about it, knowing that most of it wasn't salvageable. But this year, I took a character from the novel I finished and put him in the Nano draft as a love interest of the main character in this new book (he was a love interest in the previous book, and this takes place a few years later). You wouldn't have to read the first book to read this new one, but it would at least answer the question of what happened to him in the previous one.

And when I'm talking about "book," it's obviously got a long way to go, because during Nanowrimo I wrote a bunch of scenes that were really rough. I had the main character, had an idea of her journey, and other characters, and wrote a lot. But because I had to keep going, I would make notes along the way such as "check this" or "finish this." For instance, when the month ended and I thought about tech in the late 20th century, I realized that texting wasn't common. Flip phones had emerged, but even texting on flip phones didn't really happen until the early 21st century. So that's something I definitely have to fix in the rewrite. I also have to find out more about a south side neighborhood where some of the story takes place. I was in that neighborhood back then, but it was less developed than it is now, and the shiny police station there wasn't built until about 10 years after the time the book takes place. So there are a lot of "check this" in such sections because I don't totally remember when the transformation of that area took place (it was most likely seedy for the time period that I'm writing about, but I need to check just how run down it was).

Just as in previous years, I was so used to writing intensely that when December started, I still had a burning desire to keep writing. But then my real-world work responsibilities hit me like a wave, and I couldn't get the energy to write every day. But I have been writing often, by either reworking the Nano draft or writing in my fake blog, or here. Basically, I love writing and feel irritated if I go too long without creating something, because my life is basically about getting work done and not really generating that is unique to moi.

I just looked at what I wrote and it's still a mess. There are random scenes and holes. But the basics are there, and at least I understand who the central characters are, and the potential conflicts. What's cool, though, is that I discovered stuff as I kept writing, such as focusing on a ring or having the main character find something out about her mom that she didn't know, which in her world is quite a bombshell. I also figured out what her friend's issue is, which has made her bitter and rebellious, which also makes sense in the main character's world. So I'm on my way! But I have a lot to fix! 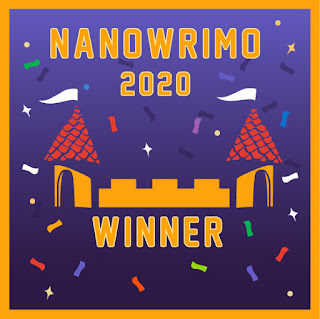 Posted by Margaret Larkin at 3:09 PM