The school with a run-on

I often walk by an elementary school in the Gold Coast, which is a nice neighborhood with money and education and clean sidewalks and nice dwellings. So it surprises me that they have a run-on sentence etched into its outer walls: 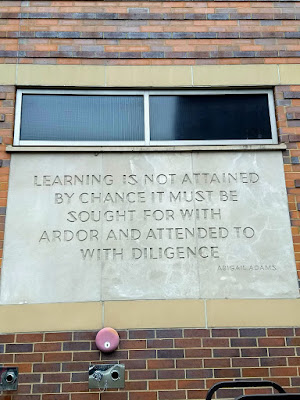 There isn't a period, either, so they probably made a stylistic choice. But why would they tolerate absolutely no punctuation in the midst of a statement about learning? Or I could understand if they at least they had a line break to separate the sentences, but to have nothing at all? It's not even accurate of the original quote, which was a comma splice (which I can't stand, but then again, it was the 18th century, Abigail Adams had no formal education, and a lot of her writing was bizarrely spelled, punctuated, capitalized, and pieced together, though maybe 18th century American English was like that, and the spelling was acceptable back then, and it's changed over the last couple-hundred years; maybe we're wrong, who knows).

This is the original quote, which is from a letter that she wrote:
"Roving is not benificial to study at your age, Learning is not attained by chance, it must be sought for with ardour and attended to with diligence."

Thus there are a couple things going on in the school's appropriation of Mrs. Adams' quote: they don't use her punctuation, and they don't use her spelling of "ardour" either. We modern Americans use "ardor," and since she was an early Yankee, she was probably still influenced by Britain. So really, in an effort to promote learning, the school might be undermining it by not being accurate; they should have directly copied what she wrote, especially since many of the students will most likely be more involved in academics as they get older.
Posted by Margaret Larkin at 7:46 PM