When people think about Milwaukee, they probably don't think of it as a pleasant vacation destination. The last time I was there was to see Rush at Summerfest, and before that, I think I went there on a day trip when I was a kid. I had no idea what a great place it is, and it really feels like a nice getaway from Chicago, which is a lot more crowded, dirty, and full of hassles that Milwaukee doesn't seem to have.

The customer service also seems superior to Chicago. I don't know if that's because people are nicer up there, if they're better trained, or what, but wherever I went, people were friendly and pleasant. I'm not saying Chicago is full of rude people, but customer service didn't seem like an effort for the people I encountered in Milwaukee.

There are many reasons why Milwaukee seems like a fantastic city. First of all, the lakefront is clean and beautiful, and it seems like the city (or state) put a lot of money into developing it. Chicago's lakefront is also great, but Milwaukee's lakefront offers a natural experience within a manageable urban environment. It's like a scaled-down version of Chicago's Lake Michigan, but with more space and opportunities to walk around in freedom. 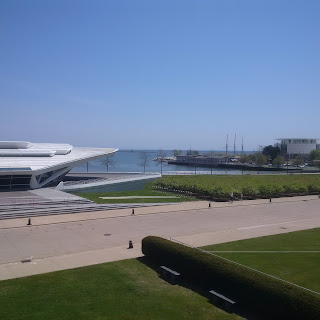 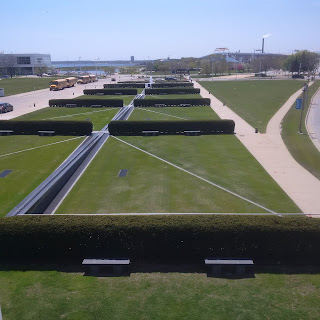 The downtown architecture was another surprising feature. I didn't know that they preserved their older architecture. Before going there, I thought the downtown area would have rundown buildings and seem like it was de-developing. But the city seems to want to maintain its history, and luckily, I was there for Historic Milwaukee's first walking tour of the season.

Images of the Milwaukee Art Museum are all over because of the famous "wings," which can also be seen from the Third Ward area (which is near Summerfest). In addition to the eclectic art collections, there's a really nice cafe and various areas to look at the lake from inside. 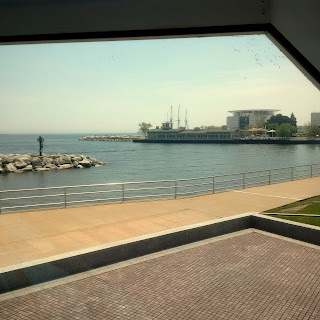 And luckily, we saw them installing public art along the street that stretches west from the museum (because the lake is east, just like in Chicago). This is the first piece that they unveiled. 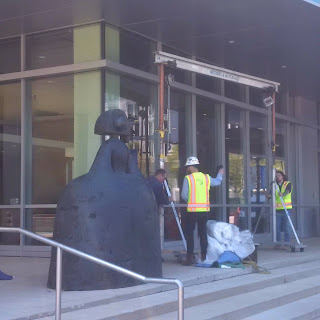 We didn't have time to go to the Third Ward, which has become a dynamic area converted from old warehouses; that's for the next trip (because I'll definitely be going back), in addition to brewery tours and other historical areas. But we did go to the Pabst Mansion, which was incredibly luxurious, and ate delicious food around the city. They really know how to do meat, cheese, and baked goods up there.

Basically, if you're assuming Milwaukee is a throw-away place that can be easily overlooked, reconsider that assumption, because it really has a lot to offer. I was pleasantly surprised, and I think others who haven't made that trip will be too.
Posted by Margaret Larkin at 11:29 PM