What's good about the South Side

I've been teaching on the South Side (more specifically, southwest side) of Chicago for almost a decade, and I have met great people down there. Before that, my interaction with wonderful South Side people was in the southwest suburb of Burr Ridge, where I worked at an excellent company (and made the huge mistake of leaving, which I regretted for years [that's worth a separate post]).

What bothers me is the bad reputation the South Side gets because of the shootings and other dysfunction that's reported in the local media, national media, and probably international media as well. The South Side is not all bad--it's a huge place with beautiful areas, friendly, straightforward people, and the best Mexican food in the city. I was going to start a separate blog about the Good of the South Side, but decided against it because I don't want my hobby blogging to feel like a job (I do blog for work sometimes); I love blogging and want to keep the feeling of fun alive.

I was at the good writing gig and was talking to coworker Dan Frank, who's yet another super-friendly Southsider, about the positive aspects of the South Side that do not get reported or really noticed, unless you work or live down there. He took a picture of this nice, large house on Longwood Drive, south of 103rd Street. This is the South Side that you don't see on the news. 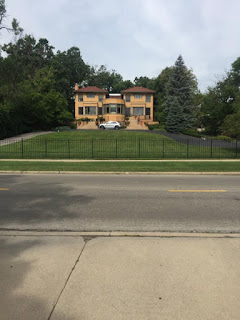 It's in a stable neighborhood with more birds and trees than the concrete and guns you often hear about.

There will be more positive news coming from the South Side...stay tuned.
Posted by Margaret Larkin at 11:38 AM