J.C. Corcoran has been working in the media for several years, and he's also a very good writer. His book Real Life Stories of J.C. and the Breakfast Club...or 20 Minutes in the Dark with Madonna is mostly about his radio (and TV) career in St. Louis, but you don't have to know that market or even his show to appreciate the book. His stories are entertaining and he offers interesting insights into the radio and media business. I previously interviewed him for my podcast about his career. 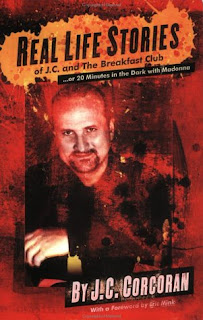 Why did you write the book?

I should answer this question, then duck...because it'll drive people who are trying to get published absolutely crazy. I was asked to. I was off the air at the time ("between jobs" as they say in the business), and was sending out a weekly newsletter called "JC Mail," which was a collection of random thoughts and sort of a text version of the show, really. A guy who owns a publishing company here was a subscriber, and sent me a note that said, "I think you should write a book!" I responded, "I think you're right!" About ten months later I did my first of about twenty book signings for Real Life Stories of JC and the Breakfast Club...Or Twenty Minutes In the Dark with Madonna. (The title refers to an interview I was doing with Madonna when a power failure hit.) That book went on to become the fastest-selling book in the publisher's history.

How did you write it? Was it hard to remember all the anecdotes and experiences you had?

The mistake most creative people make is that they don't record or write down their ideas. The greatest idea in the world is useless if you can't REMEMBER it. At the time I carried one of those little voice-recorders around religiously. When I had an idea or recalled a story I thought might be usable I'd bark it into that recorder. Then I transcribed and organized the hundreds of entries and started writing.

When you started writing, did you do an outline? How did you organize all those stories? Did the publisher help you?

The publisher didn't really contribute. I outlined things. The first book was a lot easier because there was a chronology of sorts. It was, in essence, part autobiography, so you start at the beginning, talking about how you got into the business, who your early influences were, then trace the development of your career and take everyone right up to what was, at the time, present day.

Your book makes the radio biz seem really intense and difficult. How would you describe it?

Cut-throat. Radio might be on the bottom rung of the show-biz ladder but it's still show business. And show business is a cut-throat racket.

How is it cut-throat?

ANY form of show-business is cut-throat. Radio is no exception. If you're successful at something, there's always a bunch of people observing who don't think you deserve it and think they can do it a lot better than you can. Radio and show-business is no place to go looking for friends. Now, you may MAKE some friends along the way, but I've found it's the exception to the rule.

What do you think of radio's future?

As for radio's "future," I'd say it's not good. And outside of a few rah-rahs, consultants and industry proponents whose very existence depends on a thriving broadcast industry, I don't know too many people IN the business who think much of it anymore. And, really...why WOULD they. The people calling the shots, by-and-large (and many of them ARE, btw...) are running what's left of it into the ground with ridiculously long commercial stop-sets, a great-diminished on-air staff, decidedly UN-exciting music programming, talk show hosts more interested in what THEY have to say than what their listeners have to say...and all of this at a time when radio is facing its most challenging competition in history. It's all a recipe for disaster, really.

How did people respond to the book when it came out (people in the media and fans)?

Even some of my biggest detractors praised the book because it really was good! I didn't see a single, rotten review. They saved all their venom for the SECOND book! But I think people were really surprised to see I could write. Even my dad, who was a voracious reader, was just stunned.

Why did they save venom for the second book?

I think I stunned everyone, even including my greatest detractors, with the first book's "quality." Nobody saw it coming. When the second one came out they had "recovered," righted themselves, and got their claws out again. In their defense, the second book wasn't nearly as good. But you can only tell your life story once, and I did that in book #1.

How did you have the energy to do so much in your career and keep those crazy hours?

I've never been afraid of hard work. I won't say it was the most difficult thing I ever did, but it required tremendous focus. I was newly-divorced so I was pretty much able to write, for the most part, every day for about eight months.

What about when you were working in radio? I noticed you did morning radio which required waking up very early, plus you did promotional and other activities.

There were really long days and I worked really hard. If you're going to sign on to do these kinds of jobs you have to understand it just comes with the territory. But I really enjoyed being as prominent in the market as I was at the time. I mean, the new "Batman" movie comes out and you're one of a small handful of people who's seen it? That's exciting to know hundreds of thousands of people are listening to and watching what you say, and wondering how YOU got to be sitting across from George Clooney and kidding around with him. There is an incredible rush that comes with that. It's like being handed the baseball to be the starting pitcher of the World Series.

What kind of reaction did you get from the people who you wrote about in the book, such as Emmis management, the head of KMOX, and others?

Much to my surprise, I think most people derived a twisted sense of "enjoyment" over having been referenced in the book. But the thing I really had going for me is that I was very much a "pack-rat" back in those days. So I literally had the newspaper clips, letters, memos, videotapes and other documentation for every story I told, every claim I made and every person or group I called out. It's sort of hard to challenge the validity of a story when you include the clip from the newspaper or a transcript of an encounter.

What kind of feedback did celebrities give about your assessments about them in the back of the book?

Well, I knew they'd never see that stuff because they're all in California and New York, so I was real brave about the things I wrote. Now, I also wrote about some local "celebrities," but I don't recall much reaction. Frankly, in most cases it was a lot of more-detailed back-stories of things, events and people most of my readers already knew about and had an opinion about.

This book was published about 15 years ago. What would you change, omit, or write differently?

I'm embarrassed to admit there were sixteen errors, typos or mistakes. I got the most guff about referencing the address of "The Munsters" address incorrectly. I'm serious. Also, I had a lot of issues with the editor that was assigned to my project. She was a 40-ish, single, very Catholic type and I just don't think she got it. So I'd want a different type of editor. I may also have wanted to "slicken" up the production values. We had an awesome cover and introduction, but the font, resolution and other curb-appeal aspects of the book could have been better. But, in terms of content, I was pretty pleased at the time. It was a first venture. You learn a lot.

What did you learn, and what advice do you have for people who want to write a similar book or another non-fiction book?

Advice: Take notes for six months to a year. Along the way, write down specific phrases and/or short thoughts about exactly HOW you want to write certain passages. WRITE DOWN your ideas!!! Test out some of the stories on friends and family. See if they react with interest and curiosity to the extent you anticipate. Remember, when Jay Leno was at the absolute peak of his popularity and making twenty-five million dollars a year, he was still out every Sunday night at a comedy club in Hermosa Beach testing out new material.

What did I learn? That writing a book is hard. At least it is if you want to write a real good one.
Posted by Margaret Larkin at 8:14 PM